The four blocks from Christie Street to Shaw Street, immediately south of Davenport Road, are part of the Frankel Lambert housing co-operative which contains private homes as well as Cityhome rental units and senior citizen accommodations.

Davenport's history can be traced back thousands of years, to the days when Davenport Road was used as an ancient foot path by the First Nations people seeking an overland route between the Humber and Don Rivers.

Davenport Road continued to be an important passageway, for French Fur traders in the 1600's, and for the first European settlers who arrived in this area in the 1790's. One of these early settlers was Ensign John McGill, the original owner of 'Davenport' house, after whom this neighbourhood is named.

Davenport was primarily a farming community until 1861, when the Northern Railway opened a line just south of here. The Railway attracted industry to this area, and a small village named Davenport emerged.

Davenport amalgamated with the Village of West Toronto Junction in 1889. Then in 1909, Davenport was annexed by the City of Toronto. Residential development of this neighbourhood began shortly thereafter.

In the early 1800s, Toronto was still largely covered in forest and it was very difficult to travel from one community to another to engage in commerce or social visits.

However, Toronto’s early European settlers did find a handful of First Nations trading routes that they would adopt as a means of passage through various parts of the city.

One of these early Toronto roads was Davenport Road an ancient First Nations footpath that was part of an overland route connecting Montreal to Niagara. Davenport Road was heavily used by French fur traders in the 1600s and later by the first European settlers to this area in the 1790s.

In the early 1800s the Davenport trail was converted into a roadway by a private company that built and maintained the road in return for tolls that all users of this roadway were required to pay.

There were five tollgates built between the Humber and Don Rivers. Miraculously one of these tollkeepers cottages was flagged by a local resident who had information that the structure next door to her home on nearby Howland Avenue had been relocated from Davenport Road and was a former tollkeepers cottage. A second former resident collaborated her story.

Extensive research by local history experts validated this finding and immediate steps were made to preserve and restore the tollkeepers cottage which was sitting in the path of development. After many generous volunteer hours and donations and many years of hard work The Tollkeeper’s Cottage formerly known as Tollgate #3 was finally moved back to its rightful place in a bucolic park setting on the northwest corner of Davenport Road and Bathurst Street. The Tollkeeper’s Cottage is believed to be the only early tollhouse still surviving anywhere in Canada.

Davenport's rows of attached late Victorian style houses were built between 1900 and 1929. Some of these houses have been replaced with newer semi-detached homes.

The Frankel Lambert townhouses, built in the early 1980's, include brick and wood exteriors, front porches, and private backyards. Some low and medium rise apartment buildings for seniors are located along Christie Street and Shaw Street. 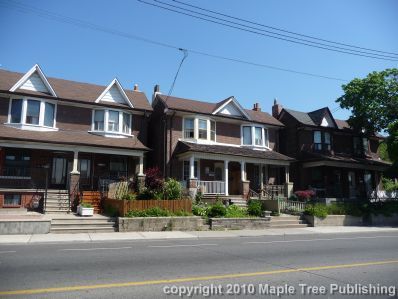 The south side of Davenport Road contains a small selection of convenience-type stores that are within walking distance of this neighbourhood.

The shops spread out along Dupont Street include the Galleria Mall, a major grocery store, a hardware centre and a variety of restaurants.

Davenport residents are located near the Wallace Emerson Community Centre at 1260 Dufferin Street. This multi purpose facility includes an indoor pool, a gymnasium, and four floodlit tennis courts that double as an artificial ice rink in the wintertime.

Hillcrest Park, at the north-west corner of Davenport Road and Christie Street, offers a spectacular view of the city skyline and Lake Ontario. This picturesque park has four tennis courts, a wading pool, and a children's playground.

Melita Park has a playground and a wading pool, while the South Park has swings, a playwall, and bocce courts.

The Davenport Branch of the Toronto Public Library has programs for children and preschoolers. 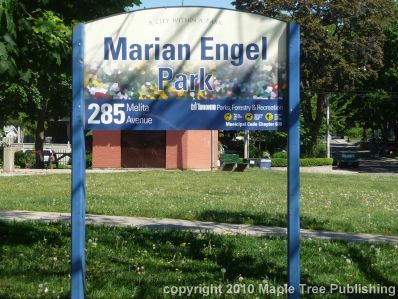 The Davenport neighbourhood is criss-crossed by a network of bus lines that run on Dufferin, Dovercourt, Ossington, Bathurst Dupont, and Davenport. These bus routes connect passengers to either the St.Clair West or Dupont subway stations.

Motorists are ten to fifteen minutes from downtown and approximately twenty minutes from Toronto's major expressways.