Flemingdon Park is a multicultural neighbourhood that has traditionally served as the first home for many new Canadians seeking affordable housing in the City of Toronto. A recent Flemingdon Park Public Library study places the total population of this neighbourhood at approximately twenty thousand people with over eighty different languages being spoken within the community.

Flemingdon Park residents have their own community information centre and health centre, a non-profit legal services clinic and a number of support programs for children, women, and families.

Flemingdon Park was first proposed to North York (now Toronto) City Councillors in 1958. It was touted as Canada's first completely planned "apartment city", and was based on similar developments already built in Europe and Scandinavia.

The initial response to Flemingdon Park was one of apprehension and concern. North York residents and politicians alike were concerned about the high density of the development. There were also questions about how city services would be provided and who would pay for them. Five North York councillors went so far as to fly to "apartment city" projects in England, Sweeden, and Copenhagen in order to view first hand this novel approach to neighbourhood building.

In 1959, after much debate the Flemingdon Park development was approved by city council. There were some obstacles along the way but Flemingdon Park was finally completed in the early 1970's.

Flemingdon Park's residential housing west of the Don Valley Parkway consists of a sea of high-rise rental apartment buildings and blocks of row house apartments. Most of these buildings offer marketplace rents however there are also subsidized housing units where the rent is geared-to-income. There is also seniors housing located in this part of the neighbourhood.

Flemingdon Park east of the Don Valley Expressway contains affordable condominium apartment buildings. Many of the units in these apartments command spectacular views of the Flemingdon Park Golf course and the Don River Valley. 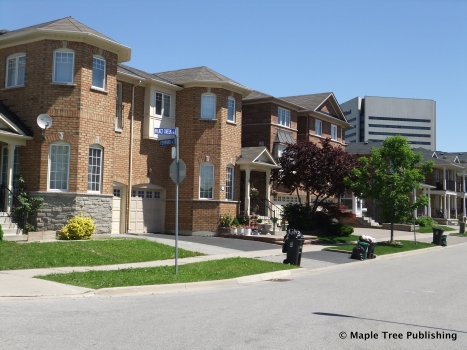 The Flemingdon neighbourhood is well served by two excellent community centres. The Flemingdon Resource Centre at 29 St. Dennis Drive is a multi-faceted facility that includes an indoor pool, a gymnasium, a day care centre and a busy public library.

The Flemingdon Community Centre at 150 Grenoble Drive features the only municipally funded indoor children's playground in Canada. This "Playground Paradise" features a two storey play structure, a huge spiral slide, a track ride, cargo elevator, talk tube, crawl tubes, construction zone, and ball pool with 8,000 balls all set in a meadow-like atmosphere. There is also a party room in this centre that can accommodate up to thirty-five people.

Across the street from the Flemingdon Community Centre is the Flemingdon Ice Arena which offers organized hockey league programs and pleasure skating. Adjacent to the arena and community centre is Flemingdon Park a long linear park that spans almost the entire length of the neighbourhood. This park has soccer fields, a baseball diamond, and a large basketball court. On the east side of the neighbourhood is another large park known as Linkwood Lane Park. This park features a children's playground, a soccer field and a baseball diamond. North of Linkwood Lane Park is the Flemingdon Park golf course, a pay as you play course set in the very scenic Don River Valley.

The Ontario Science Centre located at 770 Don Mills Road is an interactive museum of science and technology that features more than 800 exhibits. One of the Science Centre's most popular attractions is the Shoppers Drug Mart OMNIMAX theatre which features a 24-metre domed screen with a powerful hi-fidelity sound system.

Bus service on Eglinton Avenue connects passengers to the Eglinton station on the Yonge-University-Spadina line. The Don Mills bus and another bus that runs on Flemingdon Park's interior streets both connect to the Broadview station on the Bloor-Danforth subway line.

Don Mills Road and Eglinton Avenue provide quick passage to the Don Valley Parkway, a popular commuter highway that ushers motorists into and out of the city.