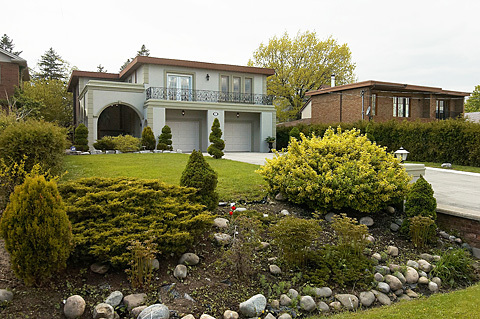 Humber Heights-Central Etobicoke, also known as Humbervale and Westmount, is a neighbourhood in Etobicoke, Toronto, Ontario. The neighbourhood is bounded by the west bank of the Humber River, west to Royal York Road and south to Eglinton Avenue West. The Humber Creek divides the area into the northern 'Westmount' (originally the Etobicoke side of York Township's Weston) and the southern 'Humbervale' centered along Scarlett Road and La Rose Avenue. As the area is just north of the Iroquois Shoreline (limit of the ancient Lake Iroquois) it is sometimes called Humber Heights.

Various styles of home décor this neighborhood, ranging from impressive mansions on one side to bungalows and split level homes to the other. Different styles of homes include Victorian cottages, Edwardian houses, Tudor style, and 1.5 storeys. There is also a affordable housing complex in the neighborhood.

A monument to Ukrainian-Canadian soldiers in Ukrainian Canadian Memorial Park in Humber Heights-Westmount The housing type varies from the 'mansions' of Yorkleigh Avenue and Westmount Park to the more modest; most are low-density single homes. A commercial stretch exists on La Rose Avenue including La Rose plaza which has many stores such as La Rose Bakery, La Rose Dollar Store, and Mel Rose Variety. La Rose Bakery is known among residents to serve excellent European food. Most of the children of the neighbourhood go to either Westmount Public School or All Saints Catholic School.

Originally the Etobicoke side of York Township's community (later independent town) of Weston which began on the western (Etobicoke) side, the early community (now called Westmount) was centered around St Philip's Anglican Church at the top of Royal York Road, one of Etobicoke's first churches. Early settlers taking Rexdale Boulevard or Albion Road to Albion Township (now in Brampton) would pass through the area.

A very large amount of land comprising the majority of farms lots on both banks of the Humber River between Lambton and Weston were first purchased by the Scarlett family in the 19th century . The first Scarlett estate, 'Runnymede' near York Township's community of Lambton, was connected by an, originally private, road (now called Scarlett Road) to the three estates owned by his sons on the Etobicoke side; the street crossing the Humber River into Etobicoke near Eglinton Avenue (then called Richview Road, a small section with this name remains). As new families, many related to the Scarlett’s, purchased land in the area, the Etobicoke community of 'Humbervale' appeared in the late 19th century along Scarlett Road, parallel to the Humber River, from the Humber Creek in the north to where Scarlett Road crosses over the Humber River to the south (near Eglinton and La Rose Avenues).

Humbervale is best known as the site of Raymore Drive, a street washed out during Hurricane Hazel with the loss of many lives. Much low-density residential was built on former farmland as many immigrants from the former Soviet Union, especially Ukraine, settled in the rapidly urbanizing Etobicoke during the 1960s. St Demetrius Byzantine Catholic church (1959) and school (1975) as well as a small commercial area were established on La Rose Avenue (parallel to and just north of the long undeveloped Eglinton Avenue) to serve the growing population. The original 1858 La Rose family farm house still stands on La Rose Avenue near Islington as well as a number of other historic buildings throughout the neighbourhood. A large collection of early photographs of Humbervale became one of the largest components of Etobicoke's 'History Room' when it was established in 1985 at Richview Library. Recent high-density development is now taking place along Eglinton Avenue such as the 'Royal York Grand' condominium.

St. Demetrius Elementary School is a professional primary school on La Rose Avenue. It is one of three Ukrainian Catholic schools within the Toronto Catholic District School Board. It was founded in 1975 as a result of the pastor of St. Demetrius Ukrainian Catholic Church, Rt. Rev. John Tataryn, who recognized the need to ensure the future of the Ukrainian Catholic community by providing its children with the opportunity to learn about and appreciate their unique heritage. The school was guided from its infancy stages to the present largely through the dedicated efforts of its founding principal, Sister Rachel Tataryn, SSMI, who served the school community in that capacity for many years. Today the school is an integral part of the St. Demetrius community, intimately linked with the Church, Demetrius Residence, and the Ukrainian Canadian Care Centre. St. Demetrius Catholic School celebrated its 25th anniversary in the year 2000.

Westmount Junior School is a public elementary school on Chapman Road near Royal York Road and Eglinton Avenue. It opened in January 1960. The school sits on a large parcel of land that is adjacent to park and recreational facilities. The six primary classrooms surround a large open area which is used for science and art activities. There is a computer lab set up within the resource center. The school has a courtyard that has a wide variety of plants. There is 21 teaching staff at the school.