The natural beauty of the Lambton area with its hills and dales, and old oak trees is shaped by the picturesque Humber River Valley which forms the south and west boundary of this neighbourhood.

Ed. Note: Historically the Lambton Mills community extended over to the west bank of the Humber River in the Government Road area. However this residential pocket is now generally considered to be part of the larger Kingsway neighbourhood.

Lambton is named after the Lambton Mill built in 1845 on the east bank of the Humber River. At its peak the Lambton Mill produced 150 barrels of flour a day. This profitable mill was owned by William Pearce Howland - a father of Confederation. Howland named his mill after John J. Lambton, who visited this area when he was then Governor General of Canada. Ed Note: The high-rise apartment building located at 4075 Old Dundas Street is situated on the former site of the Lambton Mill.

While many of Lambton's first residents were employed at the Lambton Mill, many other residents found employment at the Canadian Pacific Railway yards north of Dundas Street. Lambton was also known for its market gardens which were situated on the fertile plain of the Humber River Valley. These market gardens were still operating up until the 1950's when the Warren Park area was subdivided for residential development.

Lambton contains some charming workmans cottages near Dundas Street that date back to the mid to late 1800's. These tiny houses were built for the mill workers and their families. The apartment building at 4075 Old Dundas Street was built on the footplate of the old Lambton Grist Mill.

The "Valley" in the Warren Park school area still contains a small number of workmans cottages and a few of the old market gardener homesteads. However the bulk of the housing stock in "the Valley" consists of semi-detached brick houses built in the 1950's and 1960's. Many of these homes back onto parkland and command excellent vistas of the Humber River.

The Lambton Park houses north of Dundas Street and south of Foxwell Avenue were built largely in the early 1900's by employees of the railroad. The houses in the Foxwell Avenue area east of the Lambton Golf and Country Club, were built after World War II and feature some of the prettier brick and stone Tudor bungalows in the city. 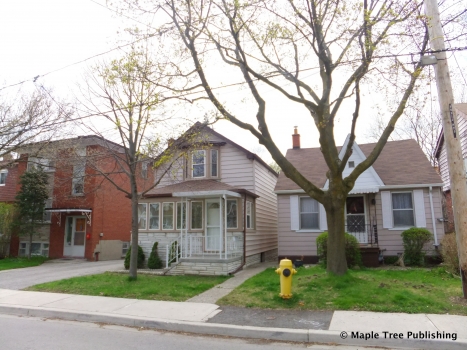 The shopping in this neighbourhood is spread out along Dundas Street, Scarlett Road and Jane Street. There is a small shopping plaza named Coopers Mills located at 4020 Dundas Street. The Coopers Mills name is historic in that it makes reference to William Cooper the first settler and mill owner in the Lambton community. (Cooper sold his Lambton holdings to the aforementioned William Howland.) Jane Park Plaza at Black Creek Drive is the largest shopping plaza in the neighbourhood. It features a large grocer, a pharmacy, a video store, a beer store, a bank, a post office and a medical clinic. 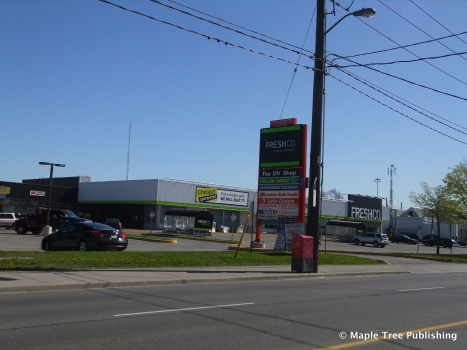 Lambton Park is located off Howland Avenue north of Dundas Street. This picturesque park features a large stand of Black Oak trees and is situated on a high topographical plain overlooking the Humber River Valley. In the middle of Lambton Park is the Lambton Arena which is the home of the Warren Park Hockey Association and the York Figure Skating Club.

Lambton Park is part of a network of city parks that follow a ten kilometre trail along the Humber River. This paved trail passes through James Gardens - an English garden that features spring fed ponds, rustic bridges and colourful floral displays. This trail links cyclists to the Martin Goodman Trail on the Toronto Waterfront.

Smythe Park located off Scarlett Road is designated as a wildlife protection area. The Black Creek winds its way through the centre of this park whose many marshes and ponds are frequented by mallard ducks and Canadian geese. Smythe Park also has plenty of recreation with two outdoor swimming pools, two tennis courts, two baseball diamonds and a modern children's playground.

The Lambton Golf and Country Club off Scarlett Road has been a neighbourhood landmark since it first opened in 1902. This scenic golf course is traversed by both the Black Creek and the Humber River making it one of the prettier golf courses in Toronto. An executive-length course Scarlett Woods Golf Course is a popular choice with both novice and expert golfers. Scarlett Woods is located at Eglinton Avenue West and Jane Street. For more information or to book a tee time, call 416-392-2484. 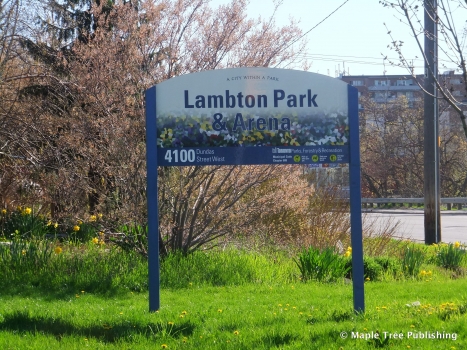 Lambton residents are well served by public transit. Regular bus service on Jane and Dundas Streets connect passengers to stations on the Bloor-Danforth subway line. The Dundas Street West bus also provides a connecting route to the Kipling subway and Go Train stations. There is also rush hour bus service from Warren Park in the valley to the Jane subway station. Scarlett Road has limited bus service to the Jane subway station.

Lambton is conveniently situated for those commuting by car. Bloor Street will take motorists downtown in about twenty minutes and the Lester B. Pearson International Airport is approximately a fifteen minute drive from Lampton.

At a glance, the Average Price of a home in Lambton is about $953,532. Mostly detached, 3 bedroom homes.