The dominant landmark in this neighbourhood is the Baycrest Centre for Geriatric Care which provides hospital and nursing home care. Baycrest is currently undergoing a major renovation and expansion of their highly regarded nursing home facilities.

Lawrence Manor was farmland from the early 1800's until the 1940's when the Canada Mortgage and Housing Corporation purchased this property for residential development. CMHC serviced this entire subdivision putting in water service, sewers, and roads, before selling off individual lots to a number of small builders in the early 1950's. The first Lawrence Manor buyers had to qualify for a CMHC mortgage. These mortgages were for 25 years at a rate of only four and a half percent!

Cows were still grazing on the north-west corner of Bathurst Street and Lawrence Avenue in 1951 when the first residents began moving into this neighbourhood. Lawrence Plaza was built in 1953 on the site of this former cow patch. Lawrence Plaza was the largest shopping centre in Toronto, when it first opened. It attracted shoppers from all over Toronto and helped put the Lawrence Manor neighbourhood on the map.

Lawrence Manor's original housing stock was built largely between 1951 and 1955. These houses include detached brick two-storey houses as well as split-level homes and bungalows. There are also some newer custom built houses in this neighbourhood. The lots in Lawrence Manor are at least thirty feet wide and all the houses have a private drive. 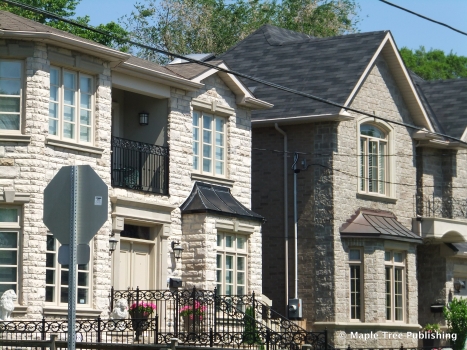 The Bathurst Street and Lawrence Avenue intersection is one of the premiere Jewish shopping districts in Toronto. Included in this mix are gift shops, bookstores, kosher food shops, bakeries selling "Montreal style bagels", delicatessens and restaurants. A handful of Chinese restaurants are also included in this retail corridor.

The Bathurst Street and Wilson Avenue shopping area is centred around smaller shopping plazas. This retail district also features many stores and restaurants that cater to the local community.

Lawrence Plaza, situated on the north-west corner of Bathurst Street and Lawrence Avenue is a popular shopping destination that attracts a local as well as a regional clientele. This plaza is especially well known for it's many outlet and discount stores.

The ultra-modern Barbara Frum Library at 20 Covington Road features a children's storyroom, French and multicultural collections, private study rooms, a meeting room, and an auditorium with a 150 person seating capacity. Combined with the library is a 10,000 square foot Recreation Centre, that contains multi-purpose rooms for use by local community groups. 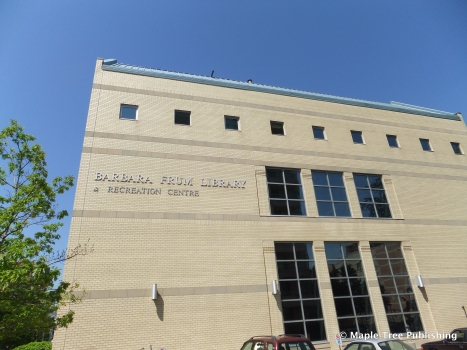 Bus routes on Lawrence and Wilson Avenues connect passengers to stations on the Yonge-University-Spadina subway line. The Bathurst Street bus travels south to Bathurst station on the Bloor-Danforth subway line.

By taking Bathurst Street south motorists can access Toronto's financial and entertainment districts in twenty-five to thirty minutes. At the north end of this neighbourhood Bathurst Street provides commuters with an on-ramp to Highway 401.