Silverthorn/Keelesdale is a Toronto neighbourhood. It covers a central section of the former city of York. The approximate boundaries are the CNR lines to the east, Black Creek Drive and Weston Road to the west and the former boundaries of York to the north and south. The area west of Black Creek Drive is known as Keelesdale, and can be considered a separate neighbourhood. For demographic purposes the city break this region down into two areas Keelesdale-Eglinton West, south of Eglinton, and Beechborough-Greenbrook north of Eglinton.

The neighbourhood contained the central commercial district for the former City of York along Eglinton Avenue where the York Civic Centre, which housed York's municipal offices, is located. The neighbourhood has a large number of Roman Catholics many of whom are Italian and Portuguese by descent. However the neighbourhood is very diverse and includes many Baptists, Buddhists and other Christians. Latin Americans, Blacks and Southeast Asians are also well represented in this neighbourhood.

North of Eglinton nearly two-thirds of the neighbourhood's population resides in rental units, many of them in low-rise apartment buildings. South of Eglinton the area retains its working class character, though the majority of residents are owners. Although the houses are modest they are also single detached and owned. There is an above average contingency of speakers these Languages: Portuguese, Italian and Spanish.

Eglinton Avenue West looking towards former York City Hall the hilly terrain of the neighbourhood is comparable to nearby neighborhoods but distinguishable compared with the city, which in general slopes south to the lake. The winding and one way streets make through traffic a non-factor for ball playing for the kids in the neighborhood.

At a glance, the Average Price of a home in Silverthorn/Keelesdale is about $853,636. Mostly Detached 2 storey 3 bedroom homes. 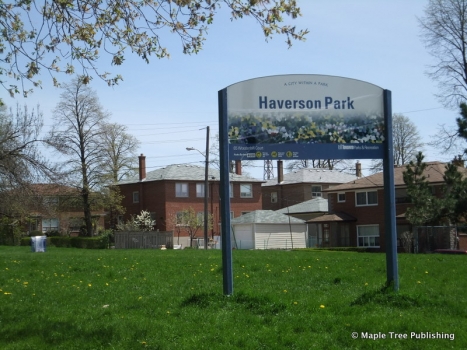