Sunnylea is a highly sought after neighbourhood that is especially popular with young families. There is a country charm here thanks to the Mimico Creek which gently meanders through the centre of this neighbourhood. Sunnylea's many mature trees and the exclusion of sidewalks add to its country-like ambience.

Sunnylea is known for its excellent schools which are a popular drawing card for this neighbourhood. The elementary schools have definite enrollment boundaries that serve different parts of this neighbourhood. You can phone the schools listed below to see which one your child would attend.

Sunnylea's bungalow, split-level, storey-and- a-half, and two-storey houses were built mostly in the 1940's and 1950's. All of these houses are detached and include at least a thirty foot frontage and a private drive.

Sunnylea residents in the area bound by Bloor Street, Royal York Road, and the Mimico Creek, have been progressive in forming the Thompson Orchard Community Association. This association has been successful in getting the city to pass site specific zoning by-laws designed to protect the residential character of this neighbourhood.

The history of the Sunnylea neighbourhood revolves around Alexander Thompson who purchased two hundreds acres of land in this area in 1803, after his discharge from the Kings Rangers.

The Thompson property was renowned for its apple, cherry, pear and plum orchards. In the latter part of the 1800's the Thompson's were joined in Sunnylea by families who cultivated thriving market gardens filled with fruits and vegetables. A handful of these old Sunnylea farmhouses are still standing both on Prince Edward Drive and on Islington Avenue.

In 1907, the first Sunnylea School - a two room white brick schoolhouse - was built on Prince Edward Drive. Edna G. Whitworth, a pupil at the school won a contest in coming up with the Sunnylea name which also became the name of this community.

Sunnylea's old farms were subdivided in the 1930's and 40's, when the present day neighbourhood was developed. The influx of new families to this community led to the opening of the second Sunnylea school in 1942.

Motorist are approximately fifteen minutes from Toronto's downtown financial and entertainment districts via Lake Shore Boulevard or the Gardiner Expressway which also provide commuters with connecting routes to the all of the major highways leading out of the city.

The Norseman Community School, located at 105 Norseman Street, and the Park Lawn Community School, at 71 Ballacaine Drive, offer a large variety of recreational programs for children, teens, adults and seniors. Norseman has an indoor pool which is extensively used for aquafit and instructional swim programs. Park Lawn has a winter ice arena that converts to tennis courts in the summertime. The outdoor pool at Park Lawn is used for recreational swimming.

Sunnylea Park and Laura Hill Park each have two tennis courts and a children's playground. Spring Garden Park is nestled on the west bank of Mimico Creek. This idyllic park has a children's playground and is well shaded with many old trees. The Brentwood Public Library is located at 36 Brentwood Road, one block west of Royal York Road and one block north of Bloor Street. This library offers year-round programs for children. The fifty-five plus Fairfield Seniors' Centre is located at 80 Lothian Avenue. The facilities here include a seniors lounge, a library, workshops, support groups, and a variety of special events including fashion shows, "pub nights," a flea market and summer barbecues. 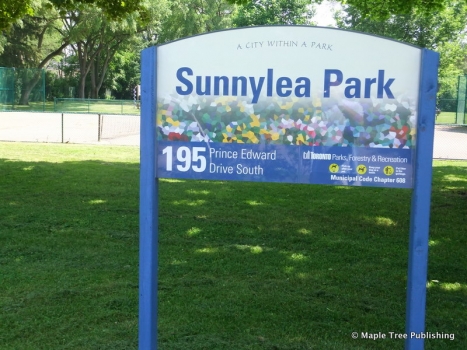 At a glance, the Average Price of a home in Sunnylea is about $1,320,516. Mostly detached, 3 bedroom homes in various styles.