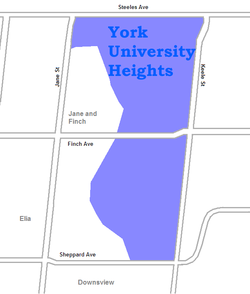 York University Heights, also known as Northwood Park, is on the north side of the city of Toronto. The neighborhood gets its name because it contains the main campus of York University. This area is most popular with the Italian and Chinese community but is home to many people from the Caribbean and South East Asia. It is located between Sheppard Avenue and Steeles Avenue east of Black Creek.

The majority of people in this neighborhood live in high-rise buildings; however, it also contains a significant number of detached and semi-detached residences, as well as a recent new urban development, the Village at York.

Village at York
The Village at York is one of the last major new-home developments within the City of Toronto including condominium townhouses, semi-detached and detached homes. First residents moved into the first phase of approximately 550 homes in the summer of 2005 A second phase, which started construction in 2007, adds about 300 more homes but includes no new townhouses. It is located just south of the York University campus, north of Finch Avenue.

Characteristics of the Village:

The Village is served by a residents' group representing both renters and homeowners, which was incorporated in mid-2006. The Village at York Residents Association Inc. maintains its own website, containing news and local business listings.

At a glance, the Average Price of a home in York Universtiy Heights is about $886,083. Mostly Detached, 4 bedroom homes ranging in style.